Proof of work is a mechanism by which participants through a consensus network have a higher level of security, receive rewards by solving complicated mathematical problems.

PoW and PoS are two different approaches that in a broad range being used in blockchain networks. However, these approaches developed backs in the 1990s and were published in scientific journals—nevertheless, the first time this technique applied in Bitcoin in 2008-2009.

How does PoW help to increase the security level of a blockchain network?

PoW helps us have a better level of security against DDoS attacks. DDoS attacks are a sort of cyber attack. DDoS uses several computers processing power in a network to avoid one or more computers having access to a specific database or the entire network. DDoS stands for Distributed Denial of Service. It also avoids using the computer’s computing power for unwanted activities such as sending spam emails or any other malicious uses of computers’ processing power in a network.

A little more scientific look at PoW shows that PoW is like a race, all machines on the network (miners) are like participants in a race, the first machine (miner) which find the solution will receive the reward, and all other machines in the network confirm it, and all pending transactions will be written and add to the current block and that block will be tampered and add to the blockchain and will be there until the end of time. 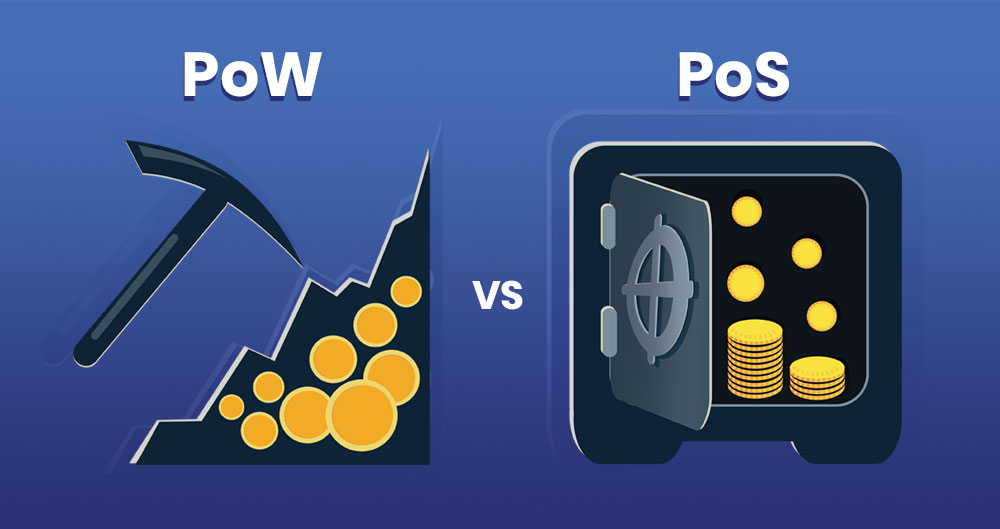 PoS is a mechanism or an algorithm that some cryptocurrency blockchain ecosystems use to work securely, but the difference is that in PoS* the more a miner hodls(1) that specific coin (Altcoin), the more mining power would have through the network.

Because of the need for a high level of computing in this mechanism, which is not as necessary as it looks, naturally, energy consumption will be increased, and energy bills will be higher accordingly.

PoW or PoS have broadly used in cryptocurrencies blockchain ecosystems, for the advantages, these approaches bring for participants, even recently Ethereuem begins to use both approaches, Ethereum, like Bitcoin, currently uses a consensus protocol called Proof-of-Work (PoW). This allows the Ethereum network nodes to agree on the state of all information recorded on the Ethereum blockchain and prevents certain kinds of economic attacks. Over the next few years, proof-of-work will be phased out in favor of proof of stake. This will also phase out mining from Ethereum. For more details on timing, check the progress of the Eth2 Docking upgrade.

1) Hodl: A type of passive investment strategy where a person holds an investment for an extended period of time, regardless of any changes in the price or markets. The term first became famous due to a typo made in a Bitcoin forum, and the term is now commonly expanded to stand for “Hold On for Dear Life.” Source: CoinMarketCap

What Exactly is Blockchain?