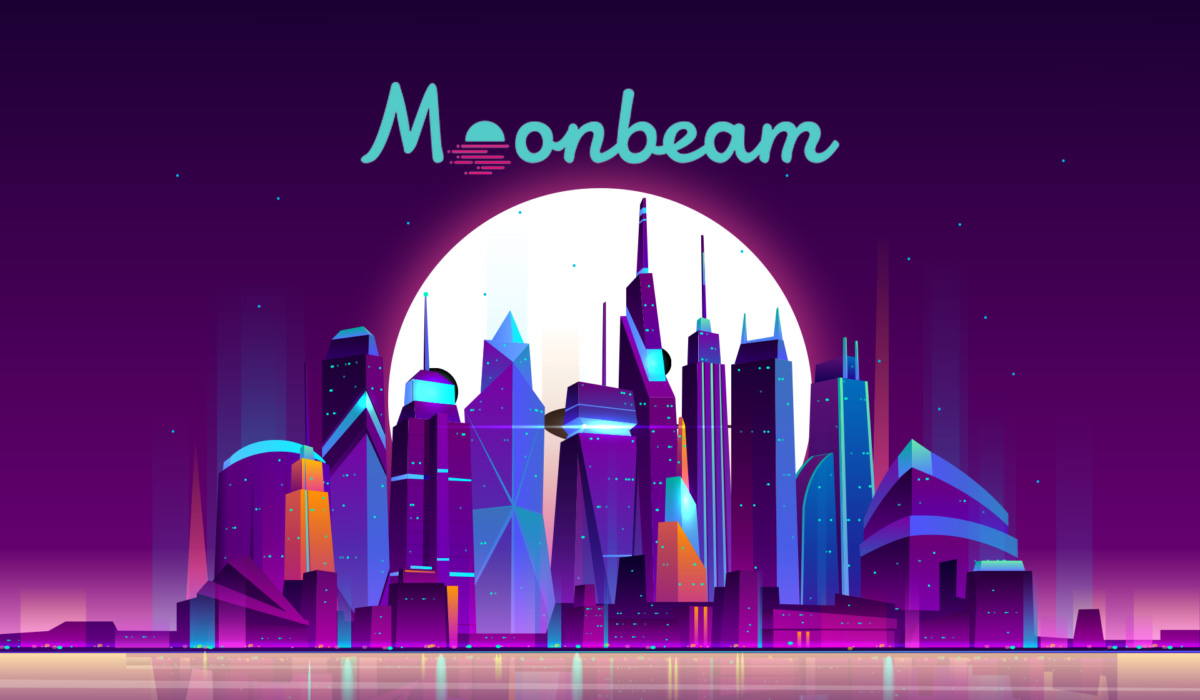 It seems the future of blockchain technology would be multi-chain networks.

Even Vitalik Butrin acknowledged that he did not see the future of blockchain limited to only one network. No doubt that one of those future infrastructures, the Polkadot, is a good sample and a pioneer, with significant achievements in recent years.

This paper reviews the Moonbeam project to create a network acclimated to smart contracts in Polkadot. At the end of this article, we will be familiar with para-chain, para-thread, and relay chains. We also explain the Moon Beam network and tell the reader more about its native coin, known as “GLMR“. We recommend people interested in learning how the Polkadot ecosystem works read this article until the end.

What is a Moonbeam?

Moonbeam is a product that aims to provide a platform for executing smart contracts in the Polkadot ecosystem. The Polkadot relay chain works as a connecting link of the entire Polkadot ecosystem participants that are independent blockchain ecosystems. Those blockchain networks cannot accept smart contracts independently; Therefore, having a platform like Moonbeam to deploy projects would be a helping act through the network.

It is necessary to know that Moonbeam won the first Polkadot para-chain auction in late December 2021 and officially began its work in early January 2022.

What is the Purpose of Moonbeam?

Polkadot has developed with the Substrate framework, written in Rust, and fundamental differences from the Solidarity language and the Ethereum network. These specifications may prevent current and new projects from potential difficulties in the ecosystem. The system has invoked several tools to reach the expected predefined improvements to achieve determined targets to present the facility to the clients.

By providing this facility, Moonbeam can provide developers with the Ethereum network features tools that are mainly designed and developed for the Polkadot ecosystem, such as inter-network messaging protocols such as XCMP and SPREE. Once the two mentioned features are fully operational, the para-chains can easily communicate with each other and convey assets and messages. Also, by completing and creating different bridges, the Polkadot para-chains will have the ability to communicate with other networks.

What are the features of Moonbeam and how does it work? 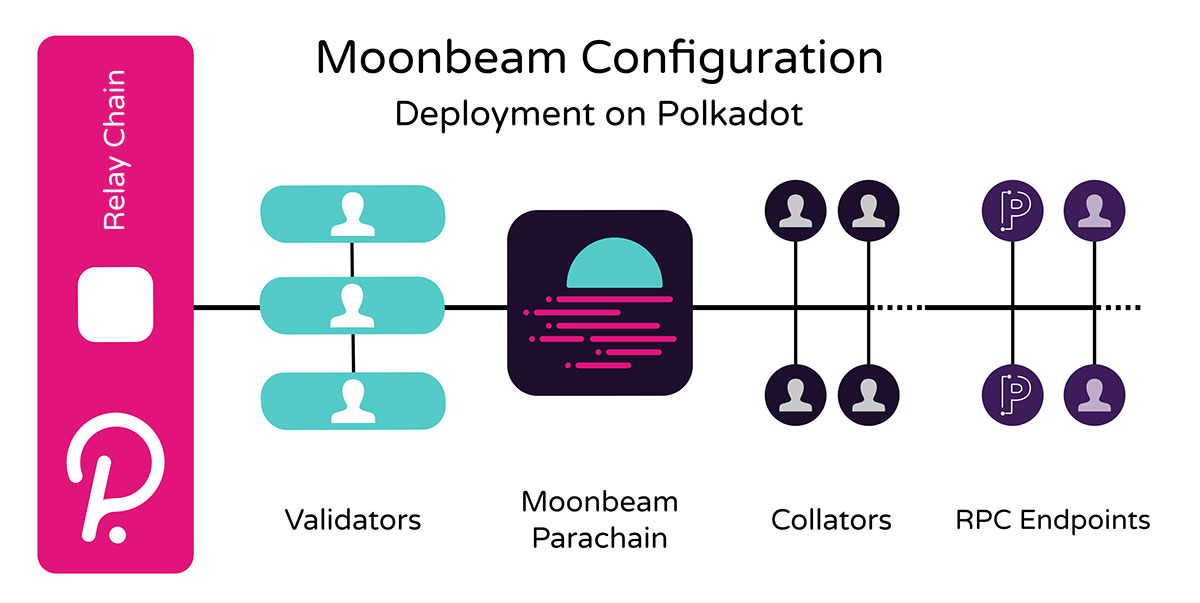 Like other Polkadot para-chains, Moonbeam relies on Polkadot shared security to prove that the system is safe and secure. It is necessary to know that the Moonbeam network uses Proof of Stake (PoS). First, Intra-network reviews transactions, then approve and aggregates and collators accordingly, and sends to the Polkadot relay chain validators for final approval and registration in the relay chain.

It is interesting to know that in the beginning, only 48 collators participated in making a block, and please remember that it does not mean that those 48 were responsible for the number of sticks. It is necessary to know that people interested in joining the network and becoming a collator must give the amount of 50 GLMR coins to have this done.

What is Glimmer coin (GLMR)?

Glimmer coin ($GLMR) will act like the network’s native coin in Para-chains Moonbeam and has four more roles:

The GLMR coin was first priced at $ 7.04 at the time of writing (its white paper). The market value of this platform is $ 551 million, which holds the 109th position in the digital currencies ranking. In the beginning, the supply of this coin was unlimited.

Then, the developer team determined the number of one billion of the GLMR will be available with an approximate 5% increase in the price annually. There are currently more than 78 million GLMR cryptocurrencies in the market in circulation. The highest price of this coin was on the day of release (January 11, 2022), which reached the limit of $40, and the lowest price was on February 25, when GLMT fell to about $ 6.52.

Of the 5 percent annual coin inflation, 1 percent is to pay to collectors. 1.5% is allocated to the Para-chains Lease Payment Reserve Fund after the end of the current contract period (96 weeks) to cover the costs of subsequent auctions. The remaining 2.5 percent will be spent on rewarding stickers contributing to network security.

One percent out of five percent of annual price increase will go to the account of the collectors. Each year 1.5% allocates to the Para-chains Lease Payment Reserve Fund to be used after the end of the current contract period (96 weeks) to cover the costs of subsequent auctions. The rest, 2.5 percent, will be spent on rewarding stickers that contribute to network security.

Also, each transaction requires a cost

The costs of which will be determined by the governance module. Here is how to distribute one billion Glimmer coins (GLMR):

The distribution of GLMR tokens will be shown in the below Pie Chart: 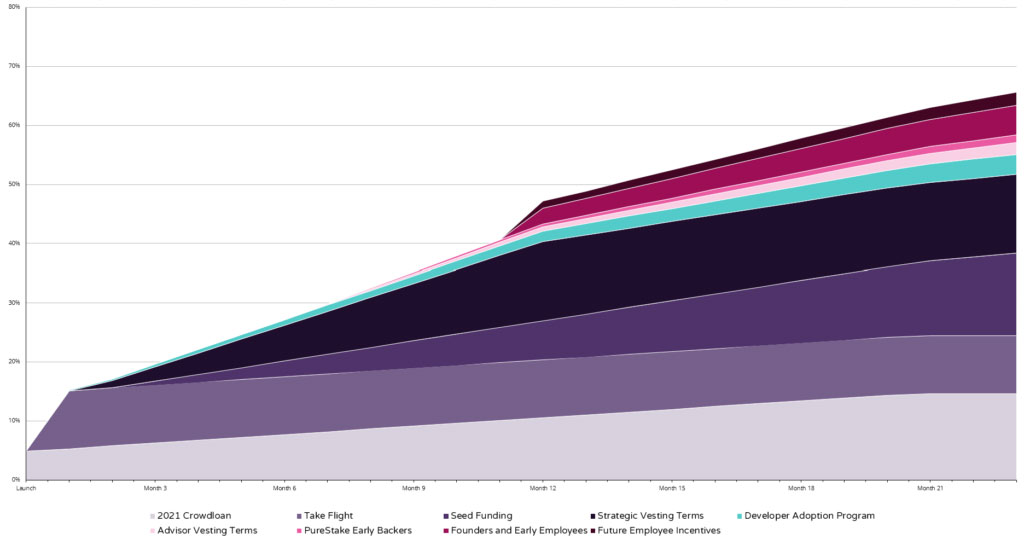 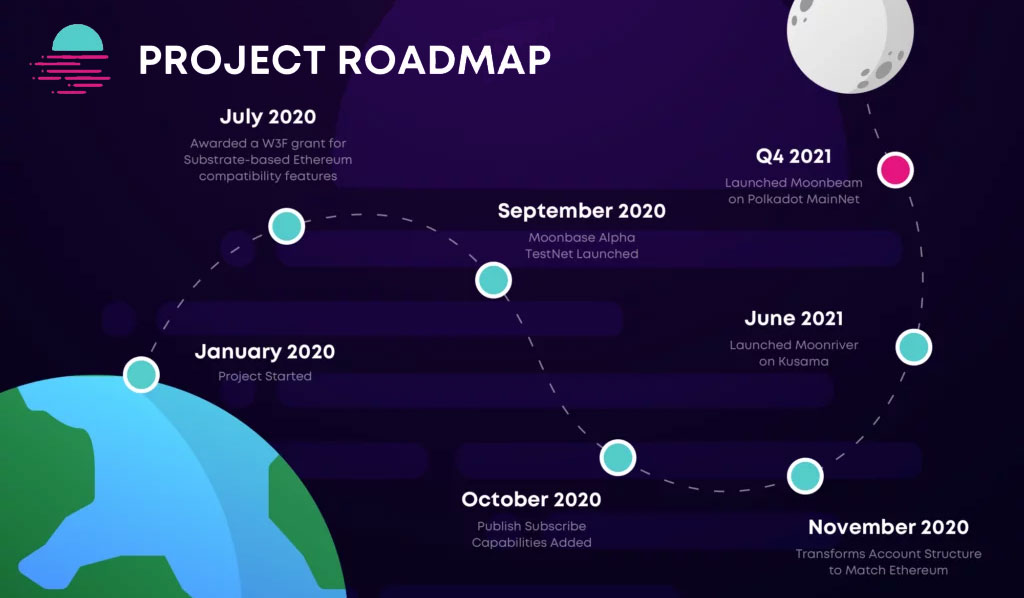 As is clear from the diagram above, this project has been faithful to its roadmap so far. The roadmap published for the first six months of 2022 aims to develop its infrastructure and use the incentive program to attract different projects to its ecosystem. 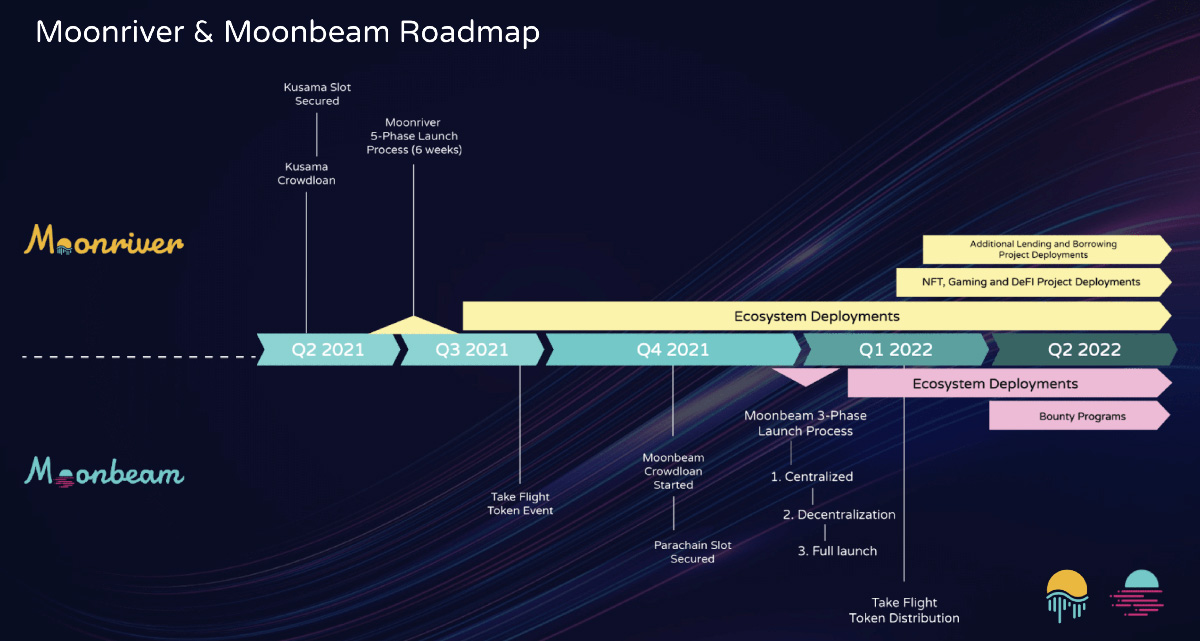 Q1-Q2 2022 Roadmap for Moonbeam and Moonriver

The project will also emphasize interacting with other Polkadot para-chains through the development and implementation of XCM (Cross Consensus Messaging) protocol requirements.

Moon Beam is a joint product of PureStake and the Moonbeam Foundation. Some of the critical people of this project are:

Moonbeam is a para-chain in the Polkadot ecosystem that links this network and the Ethereum network. This network’s facilities to the developers make setting up the minor change. In addition, by completing the communication protocol of the Polkadot ecosystem, the network’s parachutes will be able to communicate with each other and transfer assets. We also talked about the Glimmer coin (GLMR) and its role in the Moonbeam network. The network is still in its infancy but has managed to host many projects.

Polkadot, Open Source Blockchain PlatformBe the First One Who Gets the Next Crypto Airdrop